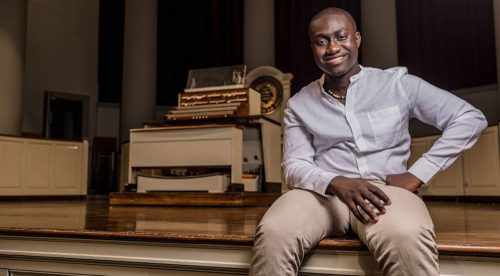 When Setnor School of Music alumnus Samuel Kuffuor-Afriyie ’20 was a child in New York City, he started playing the alto saxophone. By the time he was in third grade, he had joined the school band and expanded his musical repertoire to include piano. As his proficiency grew, he became captivated by the huge, rich sounds of the organ that filled the church during the services his family attended regularly. It would be years before his dream of playing the organ was fulfilled, but that vision was finally realized when he sat before the magnificent 3,823-pipe Holtkamp organ in Syracuse University’s historic Setnor Auditorium.

Senior year brought Kuffuor-Afriyie an opportunity that most undergraduates can only dream about. In 2018, the University announced the commitment of $1 million annually to support a new center for undergraduate research. The Syracuse University Office for Undergraduate Research and Creative Engagement (SOURCE) awards grants to undergraduates who engage in faculty-guided research and creative inquiry. Students across all disciplines are eligible for academic year or summer grants up to $5,000 to complete projects that they design and implement, guided by faculty advisors and a staff of SOURCE peer mentors.

“My project idea for the SOURCE grant came from a mixture of things,” he says. “I had visited Ghana the previous summer and I was eager to learn more about Ghanaian music. A conversation with Anne Laver inspired the idea of composing and arranging organ music from Ghanaian idioms. I received a $5,000 grant to embark on my project, which I called ‘Ghanaian Traditional Music: Broadening the Classical Organ Repertoire.’ The SOURCE grant enabled me to spend most of the summer of 2019 in Ghana to begin the project.”