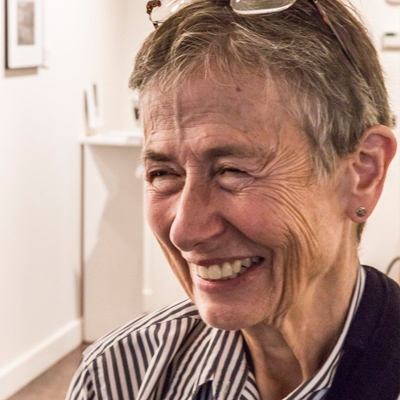 Nancy Keefe Rhodes is a writer, editor, and curator whose work covers film, photo, and visual arts. Besides teaching spring semesters in film studies/transmedia since 2010, she has published more than 400 film reviews, interviews with and profiles of filmmakers, photographers, and artists, as well as gallery exhibition catalog essays for her own curatorial projects and others.

Rhodes began writing on the arts for Stone Canoe: A Journal of Arts, Literature and Social Commentary in 2008 and from 2010-16 was editor of SCJ’s online Moving Images section. Her work has also appeared in Cineaste Magazine, Filmslashmagazine.com, Light Work Annual, Plank Road Magazine, Syracuse University Magazine, and Thefanzine.com. She was a staff film writer for Todd Burns’ Brooklyn-based Stylusmagazine.com and was film reviewer and a producer/host for the Clarion Award-winning weekly show Women’s Voices Radio on Syracuse’s NPR affiliate WAER FM 88.3 (2003-06). Her weekly film column “Make it Snappy,” plus interviews with photographers, filmmakers, and visual artists, ran in the Syracuse City Eagle from 2006-11. Many of her film pieces are online at MovieCrossRhodes.

Since 2017, Rhodes has traveled in June to Roundstone in Connemara, Ireland, for the Inishlacken Project, an invitational residency for artists working in many media, and she is involved in planning for the 20th anniversary exhibition and catalog in 2021. Previous curatorial projects include Early Black-and-White Photographs of Marjory W. Wilkins (a 2008 Light Work Grant project later exhibited as A Tender Record in 2010 at ArtRage Gallery); Hand-in-Hand: Artist and Public in Depression-era America at SUArt Galleries in 2010 (part of Four X Four: Community Curators and the Syracuse University Art Collection); Men Only: Vernacular Photographs of Male Affection from the Collection of William Knødel at ArtRage in 2012; NORMAL: How the Nazis Normalized the Unspeakable, Vernacular Photographs from the Collection of Dan Lenchner at ArtRage in 2014; catalog essay for Dorene Quinn’s exhibition LAST at Point of Contact Gallery in 2014; Apartheid & Identity: Race, Place, Being (with Amy E. Bartell) at Tyler Art Gallery/SUNY Oswego Metro Center/Syracuse in 2015; and catalog text for Tula Goenka’s Look Now at Point of Contact Gallery in 2018.

A faculty member at the Downtown Writers Center/YMCA Arts Branch, Rhodes teaches workshops in nonfiction prose in the PRO program. She provides editorial assistance to Light Work on a regular basis for their publications and designed and taught Light Work’s 2019 workshop on the Artist’s Statement.

Rhodes is a member of the international Women Film Critics Circle, has been a pre-screener for the Syracuse International Film Festival (SYRFILM), and has served on the Syracuse Public Arts Commission since 2009.