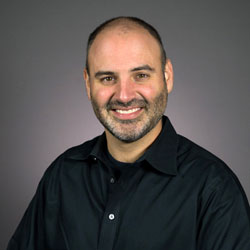 Peppie Calvar’s duties include directing the Hendricks Chapel Choir and teaching choral literature, conducting, and music theory. Annual performances of “Holidays at Hendricks" are broadcast on WCNY and its radio and television affiliates throughout the region.

Calvar holds degrees from the University of South Carolina, Georgia State University, and East Carolina University. He performs frequently as a baritone both as a soloist and as a chorister. Recent highlights include singing for high Mass at the Vatican, the Society for New Music, and Blessed Sacrament Church in Hollywood, California.

A frequent guest conductor, clinician, and adjudicator, Calvar has worked most recently at Music Educators Associations in New York, Pennsylvania, and North Carolina and at high schools, colleges, churches, and civic organizations nationwide. He has performed as a percussionist before the American Bandmasters Association, as a member of Central Winds, and as a soloist for the Charlotte Symphony. He has collaborated in jazz recordings as a vocalist, percussionist, and pianist.

An accomplished composer, Calvar has received commissions from the New York State Council for the Arts, the Syracuse Children’s Chorus, the Charlotte Symphony, and the Firebird Arts Alliance, among others. Many of his choral compositions are published by Colla Voce Publications and performed worldwide. His recording of his Mass of Reconciliation for chorus, soloists, and jazz orchestra is currently available on CDBaby and other digital music retailers. He annually serves as reader for the AP exam in music theory and recently served as producer on the premiere recording of Antonio Lotti’s Gloria No. 1, a collaboration between the VOX Choral Ensemble and the NC Baroque Orchestra. Calvar is an active member of NAfME, ACDA, and ASCAP.