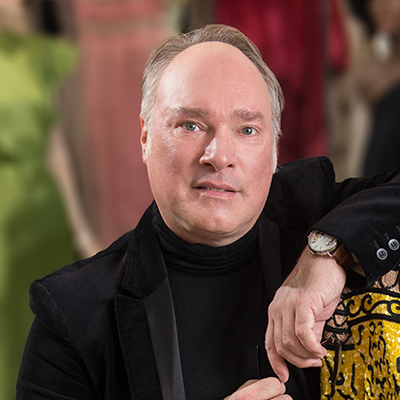 Jeffrey Mayer is a professor of fashion, fashion history, and textiles as well as the curator of the Sue Ann Genet Costume Collection, which is housed within the School of Design. He received a bachelor of arts degree in fashion history and design from Linfield College in McMinnville, Oregon, in 1987. In 1989 he earned a master of arts degree from the University of Connecticut in Storrs, Connecticut, double majoring in museum studies and fashion history.

Mayer joined the faculty at Syracuse University’s College of Visual and Performing Arts in 1992, where he has been teaching fashion history and a variety of fashion design courses as well as the overview of textiles. He has also served as director of fashion study abroad in the Department of International Programs Abroad from 1994-2003. In 1995, Mayer opened Conover Mayer in Syracuse with business partner and designer Todd Conover. Until 2006 when the company closed, Conover Mayer developed semi-annual collections of high-end women’s evening wear for Saks Fifth Avenue, Neiman Marcus, and Bergdorf Goodman.

In 2008 Mayer mounted a major historic fashion exhibition at the Everson Museum of Art in Syracuse, Marie Antoinette, Styling the 18th Century Superstar, with an accompanying book of the same title. Exhibitions that followed included Marlo Thomas as That Girl, Christian Dior 1947-1957, Emilio Pucci; Master of Print Design, as well as Styling an American Family, the 1910’s at Gustav Stickley’s Craftsman Farms, which was shown at the Craftsman Farms Museum in Morris Plains, New Jersey. This final exhibition formed the nucleus for a major 2013 exhibition at the Everson Museum of Art titled An American Look; Fashion, Decorative Arts and Gustav Stickley.

Mayer has also curated the exhibition Fashion After Five: The Clothes and Culture of the Cocktail Hour at the Onondaga Historical Society in Syracuse.