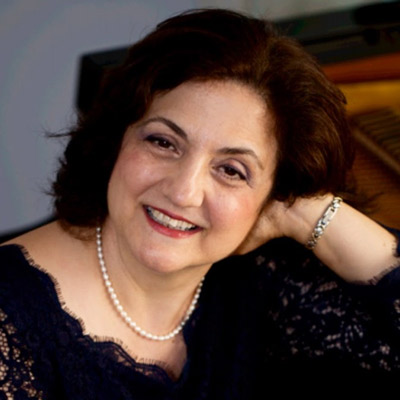 Pianist Ida Tili-Trebicka has performed throughout the United States, Canada, Europe and Asia, as orchestral soloist, recitalist, and chamber musician, including concerts in England, Holland, France, Italy, Greece, Albania, China, and many others.

Winner of the Albanian National Piano Competition, Tili-Trebicka was honored with the Albanian Excellence Award by the president of Albania and the Albanian Excellence Organization. She won the Civic Morning Musicals (CMM) Competition Piano Award and has collaborated in several national and International festivals, most recently at North Carolina Bach Festival, collaborating with several distinguished artists in the U.S. and Europe. In 2016 Tili-Trebicka accepted a SAMMY award on behalf of Society for New Music for the Inova label CD recording of Music Here and Now, where she was a performer.

Presented with the Top Teacher Award by the Steinway & Sons, Tili-Trebicka has presented masterclasses in colleges in Europe and North America and judged international competitions, including  “Kenget e Tokes” in Albania, Syracuse Symphony/CMM Youth Concerto Competition, MTNA and NYSMTA Piano Competitions, Empire State Competitions, Federation of Piano Teachers, CNYAMT, MTAC Conejo Valley Festimantic, Junior All Star in Rochester, OCMEA, Killian Competition, and others. She has participated in many MTNA Conferences, International Piano Pedagogy Conferences and lately, EPTA Conference in Helsinki, Finland. She a proud honorary member in the International Honor Society of Scholars, Phi Beta Delta, and has received the Ruth Edson Award for Excellence in Piano Performance by CMM.

Tili-Trebicka is the co-founder of Forty-Fingers Piano Quartet and Amida Piano-Duo and performs regularly with the groups in the Central New York area.

Tili-Trebicka serves on the board of directors for CNYAMT, CMM, and Syracuse Friends of Chamber Music. She received graduate degrees in piano performance from University of Arts in Albania and Syracuse University and went on to study toward a Ph.D. degree in music and humanities at the Maxwell School at SU. She has studied under tutelage of the distinguished pedagogues Nora Cashku, Margarita Kristidhi, Robert Weirich, and others. She was an assistant professor of piano at the University of Arts and Music in Tirana, Albania, and currently is an associate professor of teaching at the Setnor School of Music.

Tili-Trebicka is the coordinator of the keyboard area and serves as the graduate student advisor, advisor of the MTNA chapter of Syracuse University, and advisor of SAI, the International Music Fraternity. In 2018 she was honored with the Faculty Excellence Award by the College of Visual and Performing Arts.