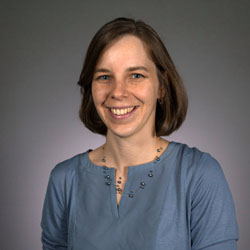 Prior to coming to the Setnor School of Music, Anne Laver was an instructor at the Eastman School of Music, where she taught a four-semester organ repertoire seminar for graduate organ majors and Healthy Keyboard Technique lessons for all incoming organ students. In addition to her teaching duties, she worked as coordinator of organ outreach programs and events for the Department of Organ, Sacred Music, and Historical Keyboards, which included running the annual Eastman Rochester Organ Initiative (EROI) Festival and directing summer organ institutes for high school students and a retreat for Eastman organ alumni.

Laver frequently performs solo organ recitals in the United States and Europe. In 2010 she was awarded second prize in the American Guild of Organists’ National Young Artist Competition in Organ Performance (NYACOP). She has been a featured recitalist at numerous conventions, including the Eastman Rochester Organ Initiative Festival, the Organ Pedagogy Conference of the American Guild of Organists, the Society for Seventeenth-Century Music, and the Region I & II Convention of the American Guild of Organists. She studied organ with Hans Davidsson, William Porter, and David Higgs while pursuing master’s and doctoral degrees at the Eastman School of Music. She began her organ studies in earnest with Mark Steinbach as an undergraduate student at Brown University and subsequently spent a year in the Netherlands under the tutelage of Jacques van Oortmerssen at the Conservatory of Amsterdam.

Laver was also music director for the 4 p.m. mass at St. Michael’s Church. In this role, she directed the St. Michael’s Chamber Choir, provided organ music for mass, and oversaw such special events and programs as the Eastman at St. Michael’s Concert Series and the Music Builds Neighborhood Summer Program.