Felix E. Cochren Jr., associate professor of theater design and technology in the College of Visual and Performing Arts’ Department of Drama, passed away on Friday, April 26, in Syracuse. He was 68.

A Syracuse native, Cochren joined the college in 2002. Beloved by his students and colleagues, he was recognized for teaching excellence with the college’s Outstanding Faculty Award in the 2007-08 academic year. 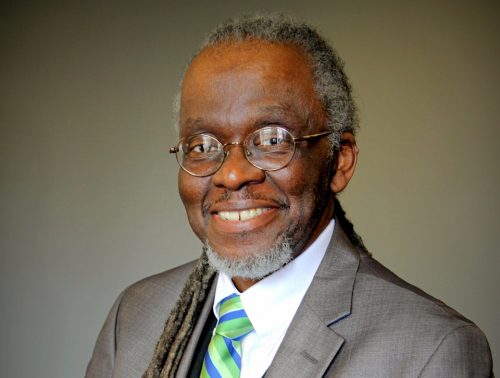 “While he might not have spoken frequently at department faculty meetings, when he did speak, everyone listened,” says Ralph Zito, professor and chair of the Department of Drama. “He had a way of asking a question or making a summarizing statement that could redirect an entire conversation and move it to a productive conclusion. And always, his focus was on the students and what was required to help them develop as artists and as people.”

Cochren was honored with the Black Theatre Network’s Winona Fletcher Award for Excellence in Design, six St. Louis Black Rep’s Woodie King Awards, seven AUDELCO Awards (New York City), a Cleveland Newspapers Tribute, a Detroit Free Press Award, nominations for Chicago’s Joseph Jefferson Award and BTAA Award, a shared OBIE Award for “Black Nativity” and the first award for Outstanding Scenic Design from the National Black Theatre Festival. In 2017 he was honored as a “Torch Bearer for Black Theatre” and participated in the Passing of the Torch Ceremony in New York City. Torch Bearers for Black Theatre are past recipients of the “VIV” (Vivian Robinson/AUDELCO Recognition Award for Excellence in Black Theatre) and are committed to the legacy and continuing development of black theater nationwide.