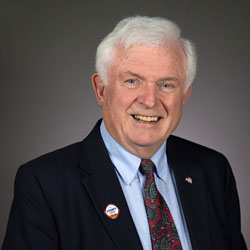 William Harris retired in May 2009 as principal trombonist with the Syracuse Symphony Orchestra (SSO) after 48 years (a charter member of the orchestra). He joined the orchestra in 1961, when it was founded, while he was an undergraduate music student at Syracuse University. His teachers include Emory Remington, Edward Herman, Jay Freidman, and John Iannotta. He was also a member of the USMA ARMY BAND WEST POINT from 1963 - 1966.

As an undergraduate at Syracuse University, Harris was active in the following: co-chair of Traditions Commission (with Molly Corbet Broad, who is a member of the Board of Trustees at SU); Orange Key – Junior Men’s Honorary (four juniors were inducted, and Ernie Davis and Bill Harris were inducted at the same time); Phi Mu Alpha (music honorary); Kappa Phi Kappa (national education honorary); Phi Gamma Delta (social fraternity); and member, Syracuse University Marching Band/

Harris has been the trombone instructor at the Setnor School of Music since 1971 and is a professor emeritus of music at Onondaga Community College (1968 until he retired from full-time teaching in 1995), where he still serves as adjunct professor of low brass (trombone, euphonium, and tuba). He also conducted the Wind and Jazz Ensembles while at OCC. In the spring of 1984, Harris was appointed visiting professor of trombone/sabbatical replacement at the Crane School of Music. He was a member of the brass faculty of the BOCES Summer Fame program and also served as an instructor of all brass at Liverpool High School in the fall of 1998 as a leave replacement for Michael Coldren. Harris was an instrumental music teacher in the Jamesville DeWitt Schools from 1966-1968.

Harris also adjudicates at numerous jazz events throughout the region, including Cultural Resources Council, Sherburne Pageant of Bands, Potsdam Stage Band Festival, Oneida, Morrisville, and New Hartford jazz festivals. An active clinician, he has appeared at events such as the Mississippi State Educators Convention. He presented a Low Brass Techniques Clinic at the NYSBDA Symposium in March 2010. He has contributed a series of articles on “Developing Young Trombonists,” which was published in the International Trombone Journal and has served on a committee to advance improvisational skills of young musicians as a member of the Jazz Appreciation Society of Syracuse (JASS).

In addition to the honor bestowed on him of professor emeritus at Onondaga Community Collage, Harris was honored by Civic Morning Musicals in 2004 with the CMM Award for Excellence in Performance. He was inducted into the Alpha Sigma chapter (Syracuse University) of Phi Beta Delta (Honor Society for International Scholars) as a result of his efforts in organizing the 2005 Simeon Popov Memorial Trombone Competition in Sofia, Bulgaria. While in Bulgaria for the competition, he was awarded the prestigious Medal of Honor from the Poncho Vladegerov Conservatory of Music. This is the highest award a musician can receive in Bulgaria, and Harris was the first trombonist to receive this honor. He is also an honorary member of Tau Beta Sigma, the National Honorary Band Sorority.