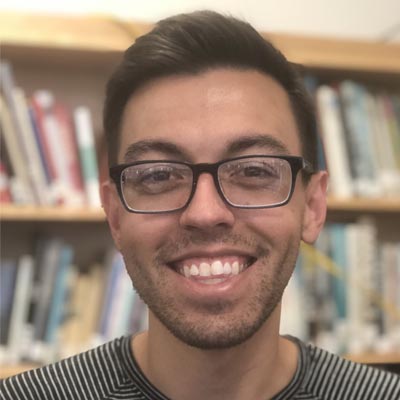 Born and raised in Syracuse, NY, Nick received his bachelors of music in music education ('16) and his masters in choral conducting ('19) from Syracuse University.

During his time at SU, he was a member of the vocal jazz ensembles Windjammer ('12-'16) and Orange Syndicate ('18), and competed internationally with University Singers, SU's select classical-voice ensemble. As a graduate assistant, he led both University Singers and the Hendricks Chapel Choir; with the latter ensemble, he toured Mexico ('18) and worked as a choral clinician in Costa Rica ('19).

Nick currently works at Altmar-Parish-Williamstown Junior/Senior High School, where he teaches general music, junior High Chorus, Senior High Chorus, and is the producer/director/music director for drama club.  Adept at piano, Nick has been playing for over twenty years. He has collaborated with soloists and ensembles throughout New York State. He also works as the music coordinator at St. Charles-St. Ann's Parish in Syracuse, NY, serving as a pianist, organist, and cantor. Nick has also been a vibrant member of the theatre community in Central New York, having music directed numerous shows for various theatre companies, most notably the Baldwinsville Theatre Guild Summer Youth Production (The Wiz, '17, and Footloose, '18).

Nick has also been singing for almost two decades, with eight years of professional vocal training. Some of his vocal highlights include: singing tenor for the world premiere of José "Peppie" Calvar's Kyrie de voces en exilio ('18), tenor in Cazenovia Chorale's performance of Gounod's St. Cecilia Mass ('18), tenor in Syracuse Chorale's performance of the Mozart Requiem ('18), and as a featured soloist in Calvar's Mass of Reconciliation ('15).