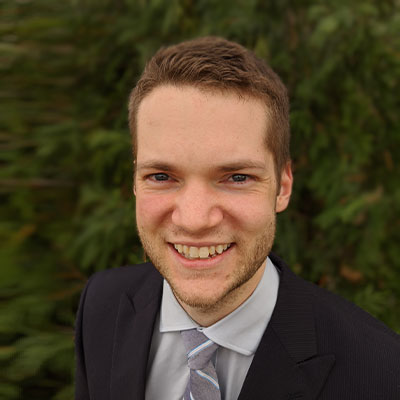 James Wolter currently serves as director of music at the Protestant Cooperative Ministry of Cornell and as adjunct professor at Syracuse teaching basic choral conducting.

As a doctoral student at the Eastman School of Music, he taught conducting to undergraduate and graduate students. In an adjunct faculty position for the Hobart and William Smith Colleges, he led the Colleges’ Community Chorus.

During his seven years teaching in the public schools (St. Francis, MN and Fargo, ND), Wolter’s colleagues presented him with the Outstanding Choral Director of the Year at the 2014 North Dakota American Choral Directors Association Conference. Wolter’s students routinely made the middle school and senior high All-State Choirs. Students earned multiple superior ratings at the state solo/ensemble contest including the 2015 Best Performance Award at the North Dakota High School Class A State Competition with members of the non-auditioned 9th Grade Davies Treble Choir.

Wolter has directed past honor choirs including the North Dakota Surround the State in Song (2015, 2019) as well as the 2018 Tompkins County, NY Middle School Honor Choir. He also served as a clinician for the North Dakota State University's Women's Choral Festival in 2013 and 2014.

As a vocalist, Wolter sings with Voices, the professional choral ensemble in Rochester, NY. He also sang numerous solos with the semi-professional Fargo-Moorhead Choral Artists as well as the tenor soloist in Bach’s Christ lag in Todesbanden (BWV 4) for the Ithaca College Madrigal Singers. In 2018, he earned his MM in Choral Conducting at Ithaca College under the tutelage of Dr. Janet Galván. As a Summa Cum Laude graduate of Concordia College, he also sang in the Concordia Choir under Dr. René Clausen where he recorded with the King’s Singers. Having recently finished his doctoral coursework at the Eastman School of Music, he now lives in Ithaca, NY with his husband as they finish their respective terminal degrees.