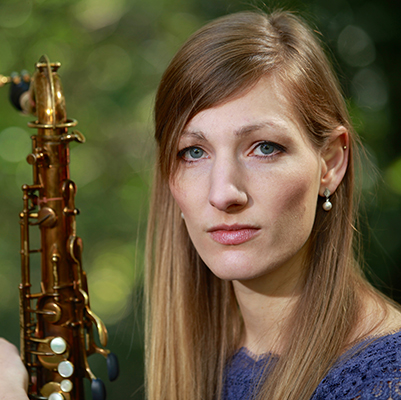 Originally a native of Germany, Diane Hunger currently resides in Buffalo, New York. She holds the tenor chair in the critically acclaimed Mana Saxophone Quartet, is a member of the Duo Klang par2, and teaches saxophone at Syracuse University, as well as at Fredonia and Canisius College. Previously she taught i.e. at Cornell University and as a teaching assistant at the Eastman School of Music.

Hunger is recognized internationally and performs frequently as soloist and chamber musician throughout Europe and the United States. Recently she could be heard at the Chautauqua Summer Festival; the 7th International Saxophone Festival in Szczecin, Poland; and the World Saxophone Congress in Scotland in 2012, as well as the Hartt School of Music, Hartford, Connecticut; Hogeschool voor de Kunsten, Utrecht, Netherlands; Carnegie Hall and Steinway Hall in New York City, and with such orchestras as the Eastman Graduate Chamber Orchestra, the symphony orchestra of the Akademie für Tonkunst, and Frankfurter Orchestergesellschaft. Additionally she has toured Spain with the Linda Bangs Darmstadt Akademie Saxophone Orchestra and recorded for the Bavarian Broadcast Station.

Hunger is enthusiastic to rediscover music from the past and frequently transcribes music for saxophones. Recent projects include Dvorak’s Terzetto Op. 74 and Libby Larsen’s Yellow Jersey, which was published by Oxford University Press in 2014. Furthermore, she is committed to the expansion of dynamic new works for saxophones and frequently interacts and works with composers to expand the repertoire for saxophones, including Steven Stuckey, Libby Larsen, Violeta Dinescu, Michael Lanci, and Amos Gillespie.

Hunger received a Diplom-Saxophonlehrer with excellence from the Musikhochschule Frankfurt/Darmstadt in 2008, a master of music in performance from Fredonia in 2009, and a doctorate of musical arts in saxophone performance and a minor in music business together with an arts leadership certificate from the Eastman School of Music in 2014. While at Eastman, she was awarded the prestigious performer’s certificate and won the 2011 Eastman Concerto Competition playing Frank Martin’s Ballade. In 2012 she won the American Protégé International Competition for Piano and Strings, because of which she was invited to play her debut in Weill Recital Hall in April 2012. During her undergraduate degree she was the only elected instrumentalist to perform a concerto with the Darmstadt Akademie Orchestra in 2007 and was a national prize winner in the German competition Jugend musiziert in 2003.

Hunger plays on vintage Buescher saxophones from the 1930s and is a D’Addario Performing Artist, performing on Reserve Reeds exclusively.