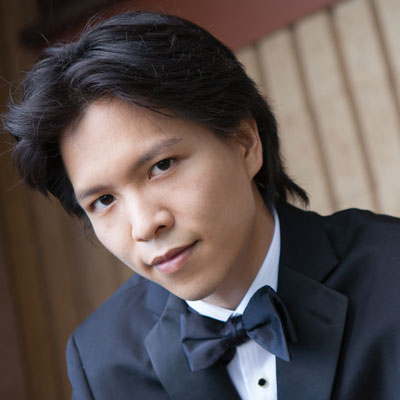 Fueled by a mad, yet pure, love for the art of piano-playing, Dr. Dan Sato enjoys a colorful career as a concert artist, scholar, educator, and chamber musician in high demand.

His passion for the repertoire can be seen in his eclectic programs encompassing the canon, neglected and forgotten works, and freshly born compositions that are rendered with "exuberant spontaneity, deep conviction, and serious compositional understanding.” Additionally, even the most avid recital-nappers have commented on their inability to sleep through Dr. Dan's performances. Over the years, he has been rewarded with ovations at the New Orleans Piano Institute, Brevard Music Center, Chautauqua Music Festival, Southeast Asia Music Festival, Garth Newel Music Center, ArtsAhimsa, and Taconic Music’s Summer Festival. Other appearances include the Elmar Oliveira International Violin Competition and the Quartet Program as one of their official pianists, and he has served as an artist-faculty member of the Perlman Music Program.

2019 began with his European recital debut presenting the complete Chopin Études in honor of his mentor, Dr. Frank Heneghan, and later in the spring, he took part in the critically-acclaimed complete cycle performance of George Crumb’s Makrokosmos organized by the Kaleidoscope MusArt Series in Miami, FL. During the summer months, he performed regularly with gifted young cellists at the Perlman Music Program and was invited by Taconic Music to play the rarely-heard Piano Quintet by Vittorio Giannini for their Summer Festival finale. In addition to these appearances, an album of transcriptions for saxophone and piano ("Deviations") was released in collaboration with Dr. Diane Hunger, and with cellist, Leah Plave, he recorded the complete works for cello and piano by Henriette Bosmans. This fall also marks his first association with Syracuse Opera as their rehearsal pianist, and he made his debut as a harpsichordist for their production of Mozart's Così fan tutte. As a specialist in piano transcriptions, he recently completed his solo piano version of Ravel's Introduction and Allegro, and in the near future, he will be presenting a solo recital program featuring orchestral literature associated with the major repertoire of the Ballets Russes.

Due to fortunate circumstances, Dan studied piano with a great number of teachers and owes all of his success to them. Chronologically, he inherited knowledge from Chieko Munakata, Peter Coraggio, Frank Heneghan, Elisabeth and Eugene Pridonoff, Donna Loewy, André Watts, Judith Burganger, Evelyne Brancart, Frank Cooper, and Kevin Kenner.