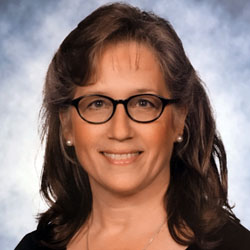 Carolyn Weber, mezzo-soprano, is a native of Central New York and has been teaching on the voice faculty at Syracuse University since August 2005. From 1983-1995 she was a vocal and general music teacher in the Fayetteville-Manlius School District and, after raising her three children, she recently returned to teaching music again in the F-M School District.

Weber’s love of performing also includes singing both opera and musical theater. A few notable performances include the role of Spirit in Mozart’s The Magic Flute and the Witch in Sondheim’s Into the Woods with the Syracuse Opera Company and the role of Flora in Verdi’s La Traviata with Oswego Opera. She also performed as a soloist with the former Syracuse Symphony Pops Orchestra & Chorus. Her musical theater roles also included Nellie Forbush in Rodgers & Hammerstein’s South Pacific and Sgt. Sarah Brown in Loesser’s Guys and Dolls with Salt City Playhouse. It was also a special treat to perform the role of Clyde’s mother, Cumie, in 2014 with her son (playing Clyde) in Wildhorn’s Bonnie & Clyde with the Covey Theatre Company.

Weber earned a bachelor of music education in vocal/general music from Indiana University in Bloomington, Indiana, and a master of music in vocal performance from Syracuse University. She is a member of the National Association of Teachers of Singing (NATS), the American Choral Directors Association (ACDA), and the National Association for Music Education (NAfME). Weber also notes that her three children are all currently pursuing careers in vocal music, and she maintains a private voice studio in her DeWitt home, where she lives with her husband, David.